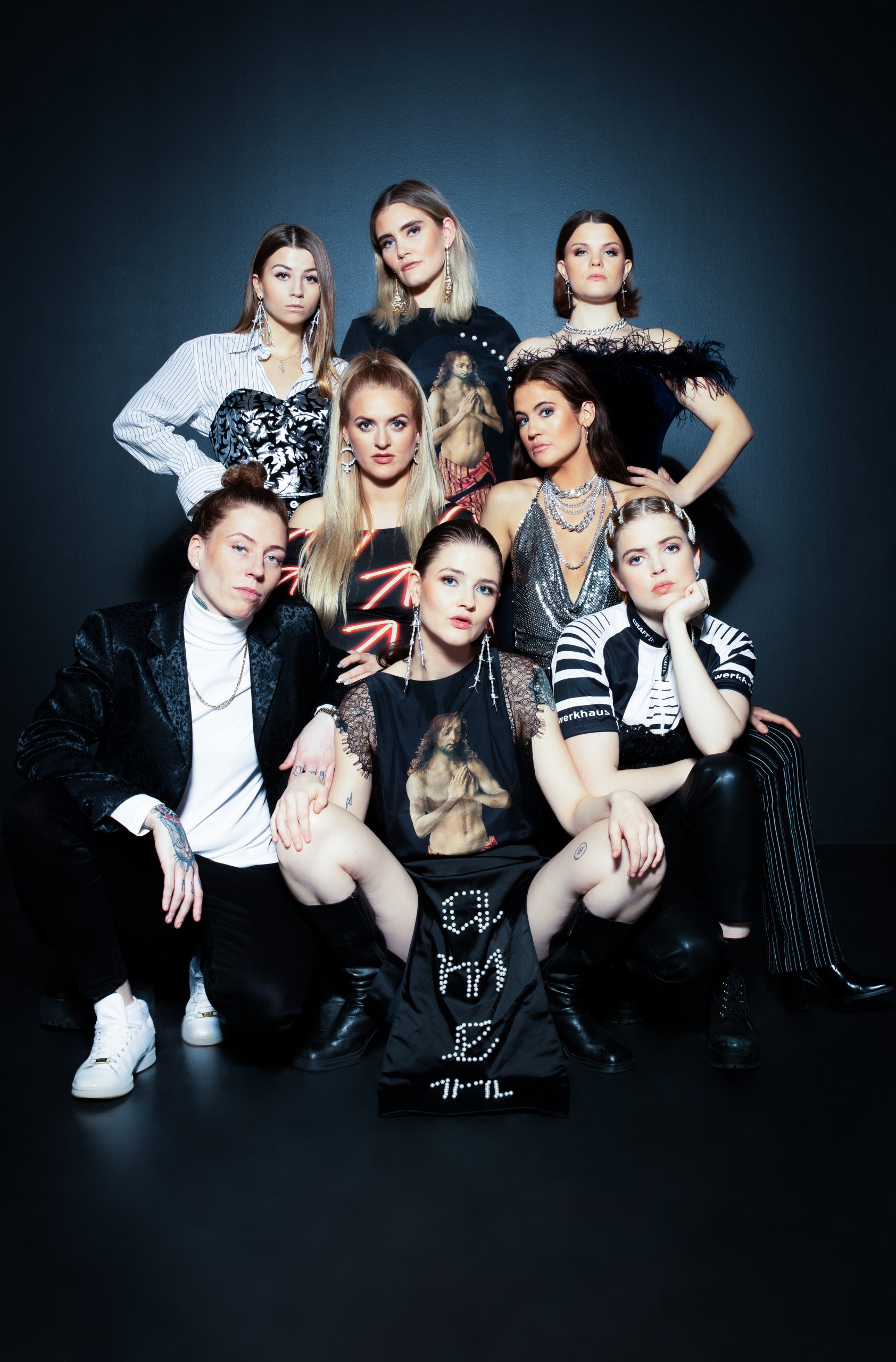 Daughters of Reykjavik: How we made ‘Soft Spot’

Fresh from gracing the front page of the New York Times, we're very excited to be joined by Daughters of Reykjavik for today's Ja Ja Ja Takeover!

Daughters of Reykjavik – formerly, and still known as Reykjavíkurdætur or RVKDTR – have just released a brand new record, and to celebrate, are hosting today’s Ja Ja Ja Takeover!

Soft Spot is the Daughters’ third album proper, but their first album with English tracks on it. Not that that’s stopped international audiences digging into their work in the past though, with the collective’s music being so powerful that it’s transcended any language barriers to find fans around the globe. That said, English speaking fans are now finally able to experience the true poetry and majesty of the band’s lyrics, so to get to know the album more intimately, we invited Daughters of Reykjavik to walk us through Soft Spot, track by track.

Steiney from the band was kind enough to discuss the record with us, so read on to find out more – and if you haven’t already, make sure to follow us on Instagram as the Daughters take over our account for the day!

Daughters of Reykjavik: How we made Soft Spot

Thanks so much for joining us! For those that haven’t met you yet, can you please introduce yourselves?

We are Daughters of Reykjavík, an all female rap collective from Iceland. The group formed 7 years ago when there was a shortage of female rappers. Since then we’ve evolved from being total amateurs to award winning musicians. WHAT’S UP YEE. Right now there are 9 girls in the band but there have been a total of 23 girls through the years. We all have different backgrounds, some classically trained musicians, actresses, dancers, graphic designers and much more.

Can you tell us about the story of Daughters of Reykjavík? What’s your collective ambition, and what drives you to make music together?

At the beginning we had a very open structure, anyone could join and you could rap about anything and get a beat from anyone. We wanted total anarchy. We would get booked and we couldn’t say if 16 girls would show up or 3 because that was the mentality in the group: anything goes. After 2 years we started getting booked abroad and then that structure couldn’t work anymore because there was money at risk but also it was getting very tiring not being able to evolve when you really couldn’t decide on anything because there were so many different opinions. So in 2015 we decided to close the group and those who wanted to stay would commit. Since then we’ve managed to mature a lot and learned to trust one another. By now we could write a book on how to successfully work in a group.

So now it’s 2020 and we just released an album called Soft Spot and it’s produced by Salka Valsdóttir who is in the band. We’re so proud of this album because we’ve been through so much to get here.

Let’s jump straight into the album then – Soft Spot is your first album in English – which we’re extremely excited about! Could you walk us through the album, track by track?

When writing ‘Late Bloomers’ we were sharing stories about the obstacles that we had faced in our early teens as women and how those obstacles had directly affected our longing and need to express ourselves through the medium of music, specifically hip hop. From there the song very organically became this soft, introspective opening of the album that really helped shape the rest of its content.

Fool’s Gold is a fun song. The song has this classic RVKDTR vibe where the verses are hard and punchy, the flows ever changing and new members hop on the mic seamlessly. The chorus is a 2000’s MIA inspired pop bomb where in a hyper autotuned manner Dísa, one of the band’s members, sings about remembering to live in the now while at the same time demanding attention and money. Very fun!

The working title for ‘Sweets’ was “The sexy song”, a very appropriate title since the song’s narrative is all about female seduction and women initiating sex. From three different narrators you get to follow them through their night out (or in) where they seem to have no problem finding a suitable candidate to take home with them and… you know.

The song is bass driven R’n’B with double time crispy verses, saxophone and some sultry hooks. Perfect for putting on your sex playlist!

‘Lófatak’, which translates directly to “Applause” is a song about the need for approval. It explores both the positive aspects of this seeking, where the subject is very driven to succeed and therefore applies herself as much as she can, as well as the dark side of seeking approval. The latter is far more present in the song’s narrative where themes of depression, unhealthy relationships and social media anxiety due to the pursuit of approval are all explored. The song has these dark pop qualities while still remaining quite hard and punchy. To balance it all, the chorus is a gorgeous soft plea for applause which prepares the listener for the next contemplation.

‘A song to kill boys to’

Well, the name speaks for itself. You could call this song the Icelandic hip hop version of Chicago’s Cell Block Tango. It’s narrative is about, you guessed it, women killing their boyfriends for different reasons. One of them stuffs her victim in a box, wraps him up and puts under the Christmas tree, another one throws her victim in a river with stones bound around his ankles and the list goes on. This song is truly about taking out aggression and rage through a fictional narrative, and having fun with it! They had it coming anyway.

An anthem. Or that’s what we set out to make when we wrote Thirsty Hoes. It’s the oldest song on the album and has been performed by the band for the past two years live all over Europe. When the song begins, the crowd almost immediately starts jumping. Then gradually a mosh pit starts forming and eventually everybody in the crowd will be chanting “Thirsty Hoes” like crazy. This song is just a ball of energy that’s highly representative for the band’s live performance.

Why do we seek to be in the spotlight? What are the sacrifices you make to maintain a career as a performer? These were the questions we asked ourselves while writing ‘Spotlight’. It is quite a soft and melancholic tune but it also feels like it has something to celebrate. Like Eeyore at a birthday party. One moment you are on stage and the next moment you’re alone looking at your phone with zero notifications. How do these massive highs and lows affect your mentality? Well, listen to ‘Spotlight’ and find out!

This song is all about touring and incorporates some personal experiences from the bands past years of touring. Involved in the song are some super cheesy violins, hyper chorused acoustic guitars and a punchy 2000’s baseline. These elements brought together make a very lively and nostalgic tune. In many ways it’s a fun silly song about friends going places but the instrumental really brings out some melancholic elements as well.

‘No Comment’ is a song about criticism and specifically online commenting. In the song the band quotes multiple sexist comments that they have encountered online or otherwise during the course of their career. The comments are repurposed as positive and empowering words of criticism and even as compliments. In many ways it’s a self-help song for the band to take on the challenges they face as women in hip hop.

‘DTR’ is a song about female friendship. Every member has a line on the song where they in some way show their appreciation to each other as friends and supporters through thick and thin.

It’s a full on Spice Girls craze where every line is sensually sung and with a tear jerking chorus which recites “You’re the one who always reminds me of the strength I have inside”.

The song was written for female friends to sing at home with each other crying while drunk, probably doing karaoke.

You’re known to be an epic live proposition – so what’s the best/most memorable live show you’ve ever performed?

Roskilde Festival in 2015. It was our first big music festival and we genuinely thought no one would show up. Then we stepped on stage and there were at least 6000 people there. We were in total shock, the show was insane because we were so hyped and out of it because of adrenaline from all these people. It took days to recover.

All the performances we had planned abroad this summer and fall have been canceled or pushed until next year. We will do Iceland Airwaves in November though and maybe some smaller gigs here in Iceland. We are also gonna continue doing our Podcast and we have plans on doing more online stuff so stay tuned.

We’ve been preparing for the release of the album. We had planned on filming a high production music video in April but of course that wasn’t allowed so instead we did a Zoom Music Video to our song THIRSTY HOES.