The melodic undercurrents of Ólafur Arnalds & Nils Frahm's latest collaboration will surely sweep you away - watch the video for 'Four' here at Ja Ja Ja!

2015 has certainly been some year for both Ólafur Arnalds and Nils Frahm!  Whilst Frahm took the 2015 BBC Proms by ‘Perfect Storm’, Arnalds has been riding the tide, or should we say tidal wave, of three successful collaborations. He kicked off the year with Alice Sara Ott and The Chopin Project, and will end it touring the Kiasmos album with Bloodgroup and BYRTA‘s Janus Rasmussen. In the meantime, both he and Frahm have produced a number of collaborative works, including a musical “blurry memory” (Frahm) in Loon, an EP comprising of what are essentially five synthesiser-led pieces, recorded over five days, in Frahm’s studio in Berlin. ‘Four’ is the exquisite lead track, taken from what is essentially a series of live takes, performed on an Oberheim 4 Voice wired up to a Korg PS3100: “Nils got some new synths and we thought we’d try them out” (Arnalds).

Minimalist, but very much ‘alive’, ‘Four’ opens with electrical pulses of synth, reverberating across a stream of soft melodic chimes.  This pivotal sound sequence, redolent of the anomalous scenario of electrical charges zig-zagging across a soft-flowing waterscape, provides an interesting contrast between raw voltage buzzing over a gently soothing underflow. As the track progresses, there is a shift in weight as the più forte ‘chiming’ briefly takes centre stage until it softens into thoughtful, spacious, easy peals. Like the slow plink, plink, of the last raindrops falling, as a rain-shower comes to an end, they bring this sublime wonder to a close.

The dark experimental video for ‘Four’ was directed and filmed by German filmmaker, Misha Shyukin, who so very kindly agreed to give us some background to the film. “It was a very open brief, I didn’t have to follow any script or narrative. The visuals are completely driven by my perception of the music. I found that the dark and ambient atmosphere worked well with this quiet minimal track. The video itself is completely CG, using a light projection technique to recreate a light source seemingly floating above a terrain, projecting continuous wavy patterns onto the surface. In the second half I “flipped” the whole setup to achieve the effect of the light coming from underneath the ground, fitting the much calmer music at the end.”

Ólafur Arnalds & Nils Frahm’s Loon joins their first collaboration Stare alongside Life Story/Love And Glory and Trance Frendz on a CD compilation titled Collaborative Works, which brings all of the pair’s recent work together and will be released on October 2nd via Erased Tapes. If you prefer wax, with the exception of Trance Frendz, you can also get most of the works individually on vinyl. 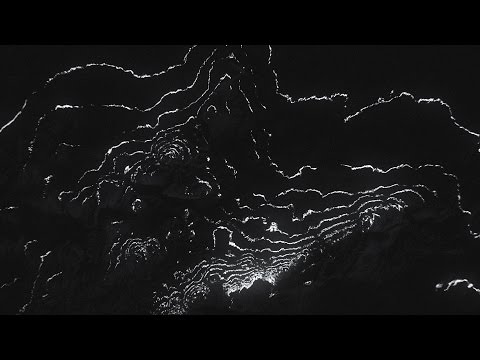